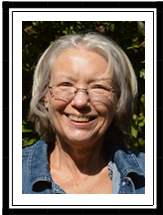 The long goodbye of Jean Crocker-Lakness ended on April 3, 2022, following years of struggles with dementia. She was born in Cleveland, Ohio on August 8, 1947, the daughter of Melvin and Patricia Pattison Lakness. She followed her husband Jim Crocker-Lakness into eternal grace less than three months after his death on January 19, 2022. Even as his own health declined, he visited her regularly even though she no longer recognized him. Together they had shared 40 years of family, faith and love.

Known by all for her strong will and direct-to-the-point character, Jean became a part of the beloved community of Cincinnati Friends in 2011, when Jim transferred his membership from Community Friends. She maintained her care and friendships at Community Friends while an active attender at CFM. She had served Community Friends as the editor of their newsletter and had been involved in support and programs for the elderly.

Prior to her illness, Jean was an active member of the Peace and Social Concerns Committee at CFM. She also served as the CFM representative to MARCC (Metropolitan Area Religious Coalition of Cincinnati), an interfaith coalition working on social issues in Cincinnati. She and Jim Newby, CFM Minister and Public Friend, would often attend the meetings together. He remembers the many conversations they shared in a car on the way to and from those meetings, of how much of a storyteller Jean was, of how he watched her decline as her disease took its toll on her.

It was in that service with MARCC that the true Jean was most evident. That strength that she was known for shined through her service, as she used her voice to affirm the Quaker testimonies she held so dear. She was steadfast in her commitment to social justice, having participated in marches and rallies while at Community Friends. It was in her passion for stewardship of the earth where Jean shined most brightly. She might not mind being remembered as an Earth mother, for she so deeply and openly loved things of the earth.

A passionate advocate for the environment, she was a long-time member of the Sierra Club, as well as a volunteer for the Hamilton County Parks District. Camping, hiking, and being out in the world defined who Jean was. In fact, it was through camping that she and her husband Jim met. He always acknowledged that everything he knew about camping he learned from her. The memories of family vacations for her sons are not those of ‘typical’ family vacations … no tourist areas for them, no amusement parks, none of what seemed at the time to be the ‘fun’ stuff. It was vacations for them “off the beaten path,” as her sons recall, “always educational, always something to learn from and about nature.”

While at times it seemed to young boys that they were missing out on those vacations, they are favorite memories now. Son Alex shared the most precious gift his mother gave him as he spoke of her during her memorial service at CFM. “The best gift she ever gave me was on those vacations, walking on trails, hiking in the mountains, where I would find a place to stop for a few minutes and look out and down and be in awe of the majestic vistas. It was in those moments that I learned about solitude and peace.”

Jean and Jim enjoyed travelling. They challenged each other in ongoing spiritual development, including trips to FGC meetings. They loved participating in folk dancing. It was always in nature, however, where Jean found the most grounding, found her refuge in the darkest of times It was in walks in the woods that she fought her first struggles after learning of her diagnosis and what that would mean for the future for her and her family. It was in the woods that she would come of find a measure of peace and acceptance for what was to come, assured that the grace of God would hold her up, that the trails, the flowers, and the mountains would remember her even
as she could no longer remember them.

As it is written in Ecclesiastes 3:4, it is now a time to mourn and a time to weep for her four children, three grandchildren, family and friends, having lost both Jean and Jim in such a short period of time. There is comfort as well that their suffering is no more and that there is the assurance in Ecclesiastes … there is a time to dance … a time now for Jean and Jim to dance together through eternity.