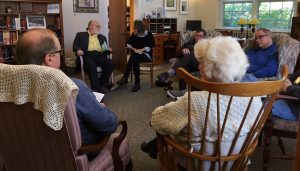 Centering Down is an adult spiritual sharing group that takes place in the meetinghouse library every Sunday at 10 AM, before worship. All are welcome to join at any time.

Each week’s topic is included in the bulletin. It typically includes a few passages from the minister’s message, as well as some queries—questions to stimulate self-examination and thought. We might spend several minutes in silent reflection before anyone speaks. Individuals are encouraged to speak from their own experiences and to listen deeply to one another, allowing a little time for reflection between speakers. In this way, we can come to know one another better and share our unique portion of Light with one another.

The following are recent centering down passages:

But turning and seeing his disciples, he rebuked Peter, and said, "Get behind me, Satan! For you are setting your mind, not on divine things, but on human things. -Mark 8:33

In this passage from the Gospel of Mark, Jesus sets forth a dichotomy that is found in much of his teaching. It is set up for us in his rebuke of Peter: "You are setting your mind, not on divine things, but on human things." There are the things of this world, and there are the things of God's world. There are governments of this world, and there is the empire of God. It is what Professor Richard Niebuhr would call a classic, "Christ against culture" statement.

In his classic book, Christ and Culture, Niebuhr helps us to understand the kinds of pressures and difficult choices that Christians are forced to make living in this culture. At one end of Niebuhr's lifeline of Christian cultural practice are those who comfortably mesh their lives of human things with the divine things of the Christian faith. The evangelical right would be good examples of this type of Christian. At the other end are those who cannot reconcile this culture with their Christian faith, and seek to rid themselves of all earthly distractions and loyalties to the empires of this world. The Amish would be a good example of this type of Christian. Christ AND culture, and Christ AGAINST culture...It is a lifeline of practice on which those of us here this morning are traveling back and forth all of the time.

Where are you on the Christ AND culture/Christ AGAINST culture lifeline of practice?

For this reason I bow my knees before the Father, from whom every family in heaven and on earth is named, that according to the riches of his glory he may grant you to be strengthened with might through his Spirit in the inner person, and that Christ may dwell in your hearts... -Ephesians 3:14-17

In the Bible the heart is a metaphor for the inner self as a whole. An "awakened heart" is where our inner being, our inner self connects with the Inner Light or the Living God. The heart is much broader than how we understand it in today's English. In Scripture and in Quaker theology, "heart" is the spiritual center of the total self which affects our sight, thought, feelings and will.

During the past number of weeks, I believe that we have witnessed, and continue to witness an example of what happens when closed hearts and open hearts clash. This clash has taken place over such issues as immigration, racial justice, and how one responds to a continuing pandemic that has taken the lives of nearly 150,000 Americans.

On the other hand, an open heart is alive to wonder and filled with gratitude. It has a passion for justice and feels the pain in the world. The spiritual journey is about the Spirit of God awakening and transforming our hearts, choosing gratitude over entitlement, compassion over indifference, and justice over the practices of injustice. Our times demand such a transformation.

How are we nurturing our hearts to be more open?

We are surrounded by a society with apparently insurmountable problems, compounded by a deadly virus that won't just go away, and by the discomfort of having to recognize that we have a major systemic racism problem that reaches into the fiber of the fabric that we call America. Each morning as I listen to the NEWS I am overwhelmed. But then, every once in a while, we are given a sign of hope, a hint that everything is going to be alright, and that life will continue. We may not be able to solve all of the world's problems on our own, but we can be faithful in a very little.

In brief, I suggest that there are three facets of life in which this lesson from Luke may apply.

Second, to be faithful in a very little means to be faithful in our society. Many of us feel so helpless in the face of society's problems. And then I remember an event like "Voices for Valeria" or our giving to the Food Bank, or Bethany House. We are faithful in little ways.

How have you been faithful in what may be considered the little things in life?

"Bear one another's burdens, and so fulfill the law of Christ. -Galatians 6:2

A week ago our nation celebrated its independence from England. Thomas Jefferson, the author of the Declaration of Independence, adopted a statement that declared that the 13 American Colonies were independent states and no longer regarded themselves as part of the British Empire. What emerged was not just a new country, but a philosophy that sovereignty lay not just in might and historic authority, but in something called natural rights. Most memorably, these inalienable rights included life, liberty, and the pursuit of happiness.

In Galatians Chapter 6, there is a tension between understanding our dependence on others, and our independence. Paul writes about bearing one another's burdens, and also about how we must carry our own loads. It is a tension that we all live in.

I am glad to celebrate independence, but most of all I celebrate our dependence on God and one another. I affirm our Testimony on Community and bearing one another's burdens. In the words of Paul, it is "the law of Christ."

How do you understand your independence and dependence?