Love in action is a harsh and dreadful thing compared to love in dreams.

If you see it another way, God will clarify the difficulty for you. It is important that we continue on our course, no matter what stage we have reached. 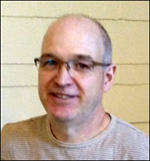 A hole was secretly dug in the back of the family yard.  Into it, a pair of ugly brown plastic glasses were dropped and hurriedly covered over with dirt before anyone could see it.  When questioned the next day, "Where are your glasses?" I could easily lie and say "I don't know.  Maybe they're lost somewhere."  The over-riding concern of those pre-adolescent days was "How will I look?" and "Will I be accepted?"  One would rather be accepted than anything, even if it meant blurring the only vision one had.

One would rather be accepted than anything,

even if it meant blurring the only vision one had!

Then, a day of awakening, or at least a new stir to change, came.  We were in the kitchen of my soon to be mother and father-in-law's home.  Jeanne, my fiancé, was telling a story about a bus ride home from her elementary school back in 1977, the same year as the movie series Roots was aired on national TV.  Jeanne's older sister Cindy was with her.  The interracial bus was getting close to home as Cindy looked right at a young black child and began repeating "Hey bug-eyes!  Hey bug-eyes!"  To make a long story short, a fight ensued, Jeanne got dragged in, and according to the story-teller, my fiancé, a number of black youth took on the two white girls who ended up with quite a few bumps and bruises.   A summary statement was then made about the incident by one of Jeanne's parents: "They (meaning the African Americans) never fight alone."

At that time it never occurred to me that to "never fight alone" could be a positive attribute.  It could reflect a sense of solidarity and common struggle rarely witnessed by our individualistic and frequently self-serving mainstream American culture.  Instead, I interpreted the statement to mean that African Americans are innately more cowardly than whites because they seem to get their strength from grouping rather than by standing on their own two feet and fighting alone.  I did not see myself as being part of a group, a huge gang of white people who regularly flexed our muscles, confident of our numerical superiority.  I was blinded of this reality.  I thought we were supposed to fight alone.

I was indignant towards the statement and towards the speaker for saying it.  So, we began to argue - me against the future in-laws.  Jeanne became tense and, of course, so did I.  An in-grown desire to be accepted by significant others was in conflict with the way my mother taught me to believe about race and color.

I grew up in an all-white neighborhood.  We had no racial strife, even after the movie Roots was broadcasted.  The white folks all got along pretty good.  We were Germans, Irish, Italian- Americans, Dutch - you name it, but all of us of various shades of pale and pastie-skins.  There were block-parties, card parties and women who were full-time moms who regularly sat together on each other's front porches sharing stories and carrying on.

On television, I regularly watched the dream of racial harmony depicted as reality by shows like Sesame Street and The Electric Company.   Jim Henson's Muppets had skin tones of every hue and shade and it never made a difference.  I assumed this depiction of reality wasn't far from being true in the world of the 1970s and 80s.  If we as a nation didn't have racial harmony yet, at least it could be arranged that way without a great deal of difficulty.  Nothing could be terribly hard about accepting one another, was my way of seeing things.

Nothing could be terribly hard about accepting one another,

was my way of seeing things.

My future in-laws looked at me as if I was from Mars.  What actual experience, besides TV, did I have with African Americans?  It was a good question and one I seriously began to ask myself.  We were in the late 1980s now, my fiancé and I.  Maybe things were not so simple.  A song I heard years ago came back to me.

But I am not a Negro
Not a Redman nor a Mex
I'm a member of the oppressing color
Language, age, and sex
I sympathize with the Arab cause
I feel for the put-upon Jews
And I keep singing
The Middle-Class Liberal
Humanitarian
Meaningful Dialogue
We are all responsible
Well-Intentioned Blues

It has been said that a fish immersed in the water never realizes that it's wet.  In a class on Liberation Theology, I initially rebelled (I think "rebelled" is the correct word, by the way) against the proposition that racism has primarily to do with power and that one becomes a racist merely by failing to question the goals and explanations of the powerful elite.  It is not just a question of good or bad intentions.  Where is my responsibility in the macrocosm of racial and ethnic inequality in America today?

It is not just a question of good or bad intentions.

Where is my responsibility in the macrocosm of racial and ethnic inequality in America today?

First of all, I have to put on my glasses.  Not the rose-colored ones that I grew up with, but a lens that can really correct my faulty vision.  For lack of proper focus that corrective lenses could give me, I had grown accustomed to a distorted sense of the world.  And because of a misguided desire to look and be acceptable to others, I buried a part of myself - my uniqueness outside the fear of non-compliance with the majority opinion.   Now, I want to discover my connection to a diversity of other human beings that this courage to be unique offers me.

I realize that my social vision is still rather weak.  Like putting on new prescription lenses, the newness of the change in seeing can at first be a "harsh and dreadful thing".  The awareness of one's responsibility for establishing and maintaining interracial justice and equality can indeed be a jarring lesson in humility before it ever becomes a steady practice.  The temptation is always to burry the responsibility when nobody is looking and to project the problem onto somebody else.  After all, "It's not our problem."  But when I look at the courage it takes to do something about racial injustice, I see it as being a harsh and dreadfully-beautiful thing.

But when I look at the courage it takes to do something about racial injustice, I see it as being a harsh and dreadfully-beautiful thing.

Saint Paul wrote that babes must feed on mother's milk until they develop the capacity for solid food.  Developmental theorists tell us the same thing essentially.  To live is to grow through stages and to press on to what lies ahead - another expression of Paul's in the same letter.  Press on to what?  To a more mature way of being human.

The glasses buried in my family's back yard are presumably still there, undisturbed.  They can rest there.  The past cannot be changed.  Now, at night I can take my glasses off and dream about peace without struggle.  In the daytime, however, I keep them on.  Only the truth will set us free.