I Don’t Remember Growing Older…When Did They?

Sunrise … sunset … swiftly flow the years - the bittersweet reflections on the passage of time in the lyrics from Fiddler on the Roof - wasn’t it yesterday when they were small? 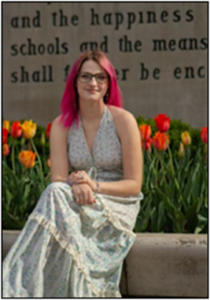 She first cast her magic upon us as a newborn carried in her mother Cathy’s arm and proudly introduced by her sister Autumn. From our first introduction onward, she would be uniquely Lily, curious and charming, artistic and whimsical, confident and caring. She would join her father Tad and her sister in playing music at our Christmas Eve services. She would be a part of her mother’s Artsy Fartsy ministry in support of children in her community.

Lily Barney, daughter of Tad and Cathy Barney, shares these words with us upon her recent graduation ...

"I’ve been a member of the Meeting my whole life. Just about a month ago, I graduated from Ohio University, with a BS in Communications as an integrated media major. I graduated in only three years, with much thanks to the Meeting for scholarships each year. My last year I lived in a house with friends and worked at a burrito place.

I had a wonderful time in Athens. The last year and a half were hard due to COVID and having to take classes online, but I surely made the best of it. I am now headed to Los Angeles to begin my job as a digital media assistant with Apple TV. I’m excited for the adventure that awaits!" 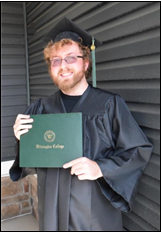 He was carried into our Meeting House as a newborn in the arms of his father Alex and mother Michelle to then snuggle in his grandmother Judy’s neck and to be introduced among us by his grandfather Paul. From the beginning, he was quiet, soft-spoken, rarely speaking, but when doing so, speaking from the depths of an old soul, a philosopher, somehow innately aware of the call to justice and mercy.

Alex Myers continued a rich legacy of Quaker education when he received his degree in Psychology from Wilmington College in May, becoming the fourth generation of Wilmington alumni. His parents, Ryan and Michelle, received their undergraduate degrees, as did his maternal grandfather John Harner and his maternal great-grandmothers, Anna Louise Mathews Harner and Josephine Hadley Harner.

Like his father, he was a Quaker scholar and is a Conscientious Objector, affirming his own personal faith commitment to the peace testimony. He is taking some time to look for a job before pursuing further education.

Cincinnati Friends is his home Meeting, where he has worshipped in silent meditation at the side of his parents and his paternal grandparents, Paul and Judy Leasure.

Christian Page (pictured at our Meetinghouse with Jim and Elizabeth Newby) came back to the place where he had built so much of the foundation of his faith and so many friendship to celebrate his high school graduation. He is the oldest of the three children of Brian and Hope Page.

The separation from us for Christian and his family did not come as a result of COVID. His family moved from our area to Atlanta for new job opportunities but have kept in touch with us through our Zoom meetings.

He walked in already exhibiting the qualities of a born leader. That often happens when you are the oldest, and that was true of Brian and Hope’s first born, but it was more than birth order that made him a leader. As he grew, he became the face and voice of our very active and socially engaged Young Friends. He connected with his peers and his leaders, as he did with all who had meaningful conversations with him. He pulled out his bicycle and rode from coast to coast with his grandfather to raise funds to support research to fight the disease that took his grandmother from him. He led our Young Friends not only within their studies and activities, but in messages shared with us all in open worship.

It was a gift to us to be able to host his graduation party so that he could share the memories of so many good times, good friends and so much good work where he grew from a young boy into the exemplary young man he is today. Christian will be attending Indiana University this Fall. He also received a college scholarship this year from Cincinnati Friends Meeting

Sunrise … sunset … swiftly flow the days - seedlings turn overnight into sunflowers … blossoming even as we gaze.