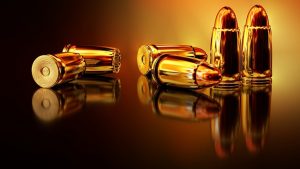 9 billion dollars - the cost of gun violence in the state of Tennessee, with $433 million of that cost paid by taxpayers.

74 - the number of people who died in Cincinnati in 2020 due to gun violence.

25 - gun violence in the United States occurs at a rate 25 times higher than other ‘developed’ countries.

8 - Tennessee has the 8th highest societal cost of gun violence in the United States and ranks 10th in the number of gun deaths.

1 - Peace activist Shane Claiborne has shared that “When the 2nd Amendment was written, guns fired one round a minute. Now they can fire over 100 rounds a minute. Guns have evolved over the years, So should our gun laws.”

According to FCNL (Friends Committee on National Legislation), the amount of gun violence and the number of gun deaths in the United States are troubling reflections on our country’s spiritual state. In the words of FCNL, “we can limit access to equipment that makes mass shootings deadlier.”

During the Spring Gathering of Wilmington Yearly Meeting, action was taken to approve joining congregations from throughout Ohio in expressing deep concern over the most recent actions by the Ohio Legislature and the signing of new concealed carry regulations by Governor Mike DeWine. These concerns were included in a letter sent to legislators and the governor by the Ohio Council of Churches.

While adding WYM’s signature to this effort, Friends held a deeper concern that the letter did not fully represent the Quaker viewpoint and Quaker testimonies. WYM’s Peace and Social Concerns Committee was tasked to prepare a letter reflecting Quaker testimonies and to present that letter to Yearly Meeting for discernment and approval.

Mary Ann Raizk, Clerk of WYM’s Peace and Social Concerns Committee, presented a letter from the Committee. A Minute on Gun Violence was approved by those gathered during Yearly Meeting, with approval as well for the letter to be distributed to Monthly Meetings in Ohio and Tennessee so that those Meetings can take action to share the Minute and to distribute the letter to newspapers, elected officials and legislators, and others as Meetings and individuals may feel led.

The letter begins: Wilmington Yearly Meeting is grieving all types of gun violence. Mass shootings, individual murders, and deaths by suicides have become all too prevalent in the United States. As Quakers, we abhor violence in any manner. We are a Christian denomination that believes there is divine light in every person and that love overpowers evil. We are striving, with God’s help, to uproot social injustice, to erase racial prejudice, to prevent violent deaths.

WYM is pleading with Ohio and Tennessee legislators to lay aside political differences to work together to pass legislation that increases age requirements for gun purchases, and for background checks for those seeking to purchase guns. We join with those who, in a Quinnipiac University national poll released in June, support raising the minimum legal age to purchase guns to 21.

The Minute on Gun Violence is posted on the WYM website (Epistles and Minutes.)  More information and a copy of the letter is available by contacting WYM Office Coordinator Hannah Lutz.