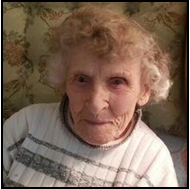 She was a light in the world, quick to comfort others, kind, soft-spoken and a true and dear friend. For those reasons and so much more, we will miss and remember our Mary.

Mary Peck was 95 years young when she left us on January 5, 2022. She had been a member of our Meeting since 1996. It had been too long since her physical presence graced us during Meeting for Worship on First Days. Always a faithful attender, she remained with us in spirit following the death of her beloved husband Maurice in 2017 after 70 years of marriage. He had been the one to drive her to Meeting, to join her on her favorite bench, even though he was not a member himself.

Without him, she could no longer make it to Meeting, but she was always with us in spirit, as he was always with her. While moving forward with life as we all must find a way to do, she mourned his loss every day. A frequent contributor to our Traveling Friend, Mary found an outlet for some of her grief when she shared her memories of Maurice in a moving tribute to him in one issue shortly after his death. “We married when Maurice was 21 and I was 20,” she wrote. “He was the essence of love, service and devotion during our marriage. Gratitude is mine that he chose me. Profound grief, I fear, will be lasting. At this moment I am told that I must go on. I forget just why. A family member shared a line from Dr. Seuss with me to try and ease my pain …. ‘Don’t cry because it is over. Smile because it happened.’ Perhaps that advice will help.”

Dick Patterson has comforting memories of his friend Mary. “I remember she and Maurice would come to the grounds at the Meetinghouse to mow the lawn weekly. Mary would weed the gardens. I served with her on our Trustees and we formed a strong bond, along with Fred and Mary Ellen Krisher.”

“Mary once told me that she did not want to live if Maurice died first,” shares Mary Ellen. “Maurice and Mary were down to earth folks, grounded in loving kindness, intelligent, and adventurous.”

Those adventures included a camping trip they took to Canada while in their 80s, causing their children some dismay and concern. They took a three-week trip to North Dakota and came back excited about all the wonderful things they had seen. They traveled to Africa and Europe. On a trip to England, they befriended an English couple who would become lifelong friends. With all of her travels, Mary considered Ohio to be one of the most beautiful places on earth.

She had given faithful service to Cincinnati Friends, serving on Ministry and Counsel and Trustees. She retired from Mason schools. She was instrumental in the founding of the Mason Public Library. She and Maurice were avid readers and how she loved her book club.

They shared an interest in conservation and nature and both enjoyed landscaping and vegetable gardening. One of Mary Ellen’s favorite memories is how Maurice teased Mary about the time she brought home a start from the invasive kudzu plant from the south and planted it in their yard. “Of course, it grew and grew!” Mary Ellen recalls fondly.

Dick recalls that Mary was an avid fan of the San Antonio Spurs, with Tim Duncan her favorite player. “The games were televised late at night,” recalls Dick, “but she would stay up and watch them in their entirety. My wife Sharon went to Build a Bear and had them make a Tim Duncan look-alike bear and we gave that to Mary. She placed it in a rocker near her TV so the two of them could enjoy the games together.”

Dick also remembers Mary for her gift of writing poetry. “She could write poetry as easy as my writing this about her was for me,” he says.

There was a ‘secret’ part to Mary in an important way. For many years in issue after issue of our Traveling Friend, there would be many a poem, some original, some shared from other poets whose words echoed and affirmed our Quaker testimonies and values. There would be uplifting quotes and even some short stories and book reviews, all submitted and shared by a wonderful and charming creature known as Phoebe, our Meetinghouse Mouse. Not everyone realized that Phoebe was none other than our own Mary Peck.

She retired Phoebe after a while, but she always felt a connection to us through our newsletter, on occasion sending small submissions in large print emails to compensate for her failing eyesight. She shared how receiving her newsletter in the mail would help her feel that connection she had all those years when she sat on a bench in our Meetinghouse, with her beloved Maurice by her side.

Thank you to Mary Ellen Krisher and Dick Patterson for sharing their memories of Mary.