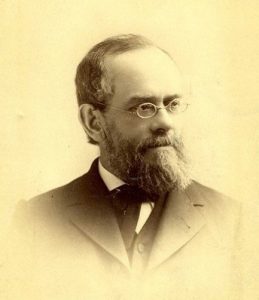 Murray Shipley was born in New York City to Quaker parents, Morris and Sarah Shipley. The family moved to Newport, Kentucky, in 1843, when Murray was 13 years old, and he soon began attending St. Xavier College. Two years after marrying Hannah Davis Taylor in 1851, he started a wholesale dry goods business.

Shipley believed strongly in maintaining integrity in business. “True commercial success is dependent on justness and sagacity,” he said, “and a deep realization that nothing narrower than a purpose of the public good, as well as his individual profit, should be the aim of every true business man.”

His ethical dealings were rewarded with a level of prosperity that enabled him to devote his life to philanthropy, peace activism, and other social concerns. During the temperance movement, he even helped open a working men’s coffee house, “where the comforts of a resort and a reading room were afforded, without the evils of a saloon.”

Shipley delighted in books and paintings, and was one of the initial contributors to the construction of the Cincinnati Art Museum. In addition, he loved to share his knowledge and resources with others. As his memorial minute noted, “It was his practice for years, during the long winter evenings, to gather a company of young men and boys in his drawing room, and instruct them in practical lessons on business life, the need of culture in social and business life, and often gave beautiful illustrated lessons on art.” These informal gatherings later prompted the formation of the Shipley Literary Society, which for two years after Shipley’s death met weekly at the meetinghouse and offered Scripture readings, programs on Friends’ history and principles, debates on such topics as capital punishment, and addresses on various fields of interest.

Shipley was recorded as a minister in 1868, and in many ways he observed Quaker traditions. For example, when completing his passport application, he crossed out the word swear and wrote in the word affirm. However, when traveling in Europe, he underwent baptism and took communion, actions which caused Cincinnati Monthly Meeting to request the return of the minute that had been given to him before his trip, a sign of the Meeting’s disapproval.

Four years after the death of his wife, Hannah, due to complications giving birth to their ninth child in 1871, Shipley married a distant cousin, Catherine Morris Shipley, with whom he spent the remainder of his days.