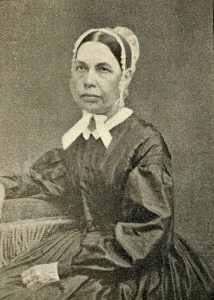 Mary Jordan Davis was born near Lynchburg, Virginia, and came to Cincinnati with her Quaker parents, John and Hannah Davis, in 1814. She married Caleb Taylor in 1830, and was widowed 13 years later when her husband was killed in a pork house explosion, leaving her with four young children to raise on her own. “Although she was naturally of a cheerful disposition, and continued to maintain it,” noted her memorial minute, “the loss of her husband produced too deep a wound not to leave its traces even to the end of her life.”

This experience might have contributed to her tremendous compassion for others: “Her heart was alive to the interests of the poor, the neglected, the outcasts, and the unprotected.” Taylor visited female prisoners, and was so well known for her advocacy on their behalf that the police would often come to her for help with women they arrested. It was at her insistence that the city finally covered its patrol wagons so that prisoners would not be exposed to the pubic gaze as they were carried through the streets. She also helped found the Home for the Friendless (a residential facility for unwed mothers) and served on its Board of Managers.

Beyond these public activities, Taylor performed many private acts of kindness. She opened her home to indigent women, and was known for her humility. “In her conversation with the erring she placed herself on a level with them, and invited and persuaded rather than lectured or threatened them, which was one great reason of her gaining the confidence of the objects of her care. She always assured them that the Savior came to save us sinners, not you…every wayward girl who came under her influence soon came to feel that Mrs. Taylor really loved and cared for her.”

Taylor was relentless in her advocacy for those in need. “During a season of great discouragement, during the [Civil War], particularly when the city was threatened, some of the managers [of the Home for the Friendless] proposed to abandon the work,” noted her memorial minute, “but she most earnestly insisted upon its continuance, feeling that it would be disastrous to turn the inmates unprotected into the street.”

Taylor became an Elder of Cincinnati Monthly Meeting in 1857. Upon her death in 1875, she bequeathed $500 to the meeting to be used for the benefit of individuals in limited circumstances—continually giving to others after her death as she had done throughout her life.